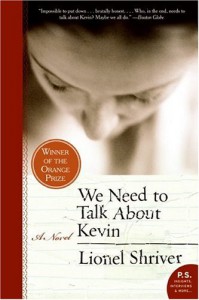 The novel is written as a series of letters from the mother of mass murderer Kevin Khatchadourian to her husband. The mother is Eva Khatchadourian, and Armenian- American woman who loves to travel the world and built a business empire from travel books.

The letters begin in 2000, two years after Kevin murdered class-mates and school staff in a carefully planned massacre for which he harbours no regret.

As the chapters unfold we build a picture of a woman pressured into motherhood by her all-American husband, Franklin. The prose style is indicative of a pretentious and self- involved snob, who thankfully becomes more sympathetic as her story unfolds. It looks at how society blames mothers (but not fathers) for the crimes of their children, and a mother’s generalised fear that any lack of parental skills on their part, might create a sociopath.

The story isn’t solely about Kevin. Eva’s dislike of American culture and her complicated relationship with her own mother, and the effect of mass media on our society are all important themes. However, when Eva does write about Kevin she describes a forceful and indignant baby, which she feared even before his birth, and failed to emotionally bond with as an infant. A boy who delighted in torturing his mother, vandalising her study, refusing food, toys and attention. What builds through this constant rejection is an erosion of self that mothers too often experience, but writ large, because Kevin is a terrifying, calculating, lying and abusive boy. Franklin assumes that any failure lies with Eva, and that Kevin is a bright and loving son. She continues begging her estranged husband to believe her two years after their son was arrested.

Eva may be vindicated by history, but her fears were ignored or explained away by Franklin, throughout Kevin’s childhood, while Kevin’s dark influence grew more oppressive in Eva’s imagination. A family tragedy involving a bottle of drain-fluid might elevate Kevin to quick-thinking hero in his father’s mind, but Eva finds it easier to believe Kevin is to blame when his little sister loses an eye.

A question asked after real life school shootings might be, how did the parents not see it coming? Eva does see something coming, perhaps not exactly what happens, but something unforgivable; the trouble is no one believes her. And this gas-lighting of women’s fears and the assumption that a mother, however accomplished, will put her life on hold for her children is at the heart of this novel.

Why did Kevin do it? No one knows, not even Kevin himself.