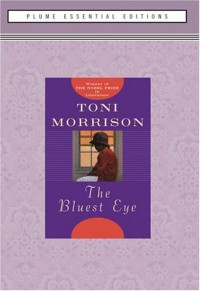 I read the Vintage edition that included an afterword where Morrison discusses the problems she sees in her first novel, and while I enjoyed Beloved and Song of Solomon more, this book in spite of Morrison's complaints is an amazing debut.

We can see in the text the seeds of the author's immense talent and beautiful use of language that come to fruition in later works. Its a book full of heart, narrated by children who have not yet been crushed by the concepts of beauty and ugliness and connect the lack of marigolds with the tragedy of their friend.

"It was as though some mysterious all-knowing master had given each one a cloak of ugliness to wear, and they had each accepted it without question. The master had said, 'You are ugly people.' They had looked about themselves saw nothing to contradict the statement; saw, in fact, support for it leaning at them from every billboard, every movie, every glance.

It rages at a standard of beauty that excludes blackness. A school system that elevates whiteness, and a society that accepts as normal male cruelty and dominance. The prose is rich and poetic and the characters are gritty and flawed.