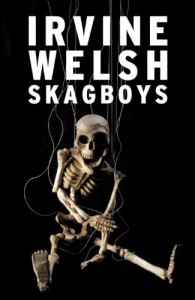 Twenty years after the release of Trainspotting in 1993, Irvine Welsh wrote a prequel “Skagboys”. We are introduced to the main characters before they encounter heroin, and taken through the degradation of the working class in Scotland and elsewhere during the Thatcher years, including a poignant scene during the miner’s strike. The same degradation is reflected in the city of Edinburgh which is revealed not only as the Athens of the North, but also as the AIDS capital of Europe.

As with Welsh’s debut novel the prose is written in Scot’s vernacular that gives a warmth and depth to the story, although the way it slips away for some of the older characters suggests that the mode of expression might be contrived at times rather than natural. It is a dark and terrifying look at the psyches of young men. Women are invariably called rides (if they are sexually attractive) or not rides (if they are not). Even the most sympathetically revealed female character Alison, is shown in a very laddish way and does not in any way address the toxicity of the misogyny rampant in this group where women’s agency is exchanged for drugs on a regular basis.

It is a political novel, and looks critically at the lack of action to tackle the rising problems of AIDS, drugs and unemployment during the 1980s. It is very much a working class story and everyone who is educated and gainfully employed is seen to be naive at best and the enemy at worst.

The lads, Renton, Sick Boy and Begbie, are psychopaths – lying, cheating, stealing, manipulating, or beating people to a pulp as a way of life. There are moments of clarity in Renton’s narrative where he acknowledges how messed up he is, and how nothing about his life justifies what he becomes. Sick Boy and Begbie share no such revelations.

The prose is very effective, the story is fairly interesting, and the characters are about the same as they were in Trainspotting, although perhaps too much the same at times. There are some gorgeous paragraphs in there, particularly where the author is using Spud or Renton to share a teachable moment with the reader.

From Spud : “Too much chargin aboot: it’s killin us aw, man. The rat race n that. Stressed if yuv goat a joab, stressed if ye huvnae. Everybody oot fer themselves, at each other’s throat n daein each other doon. Nae solidarity nae mair, ken?”

From Renton: “If being Scottish is about one thing, it’s aboot gittin fucked up … Tae us intoxication isnae just a huge laugh, or even a basic human right. It’s a way ay life, a political philosophy. Rabbie Burns said it: whisky and freedom gang thegither.”

If you loved Trainspotting, like I did, you’ll enjoy this novel. If you haven’t encountered Welsh, then Trainspotting is a much better place to start than Skagboys.

Wordsmithery: The Writer's Craft and Practice by Jayne Steel