A look at the very first novel 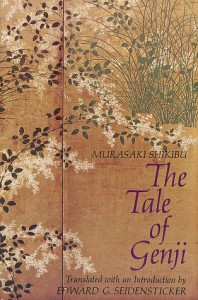 The edition I read is translated by Arthur Waley and published in 2016 by Stellar Editions. It is only 183 pages and nine chapters and appears to be photocopied then printed with marks on some pages that suggest the edge of the original text. Genji is still a young man at the end of this version as opposed to the full text which takes us beyond his 40th year.

This is said to be the first novel ever written. It is the story of Genji, the illegitimate second son of the emperor. It is set in the Japanese royal court in the old capital of Kyoto in the 11th century. Genji enjoys the attentions of numerous women and, after some disastrous affairs, tries to learn some level of responsibility, a difficult task for someone who, because of his status and extraordinary beauty, almost always gets his own way and is rarely taken to task.

11th century Japanese court shares many similarities to our own celebrity culture. However, there are also many stark differences which make this a fascinating read.

The translation or the original language is often clunky and many of the characters are poorly drawn and easily confused. In spite of this it is fascinating to see early conventions in novel writing that are still used today.